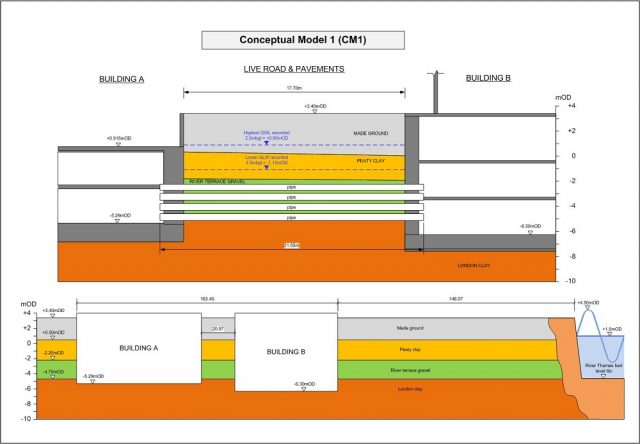 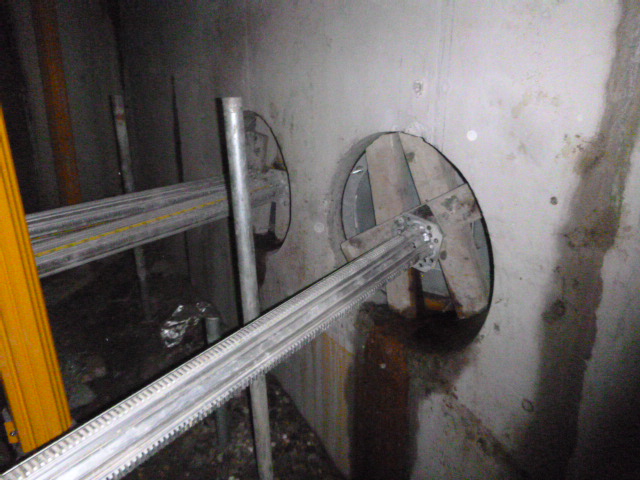 Two new residential developments located on opposite sides of a busy road in Westminster (Buildings A & B) each have deep basements.  In order to maximise available accommodation space, the developer chose to connect the two buildings beneath the live road by installing 8 No. 520mm OD service pipes, thus avoiding the need to duplicate many space consuming plant room functions.

Prior to the auguring of the first pipe, a 700mm hole was diamond drilled through the secant pile wall of Building B. This resulted in uncontrolled flow of groundwater, sand and gravel from the River Terrace Gravels (RTG) behind the secant wall, into the basement. It also caused a hole to develop in the road outside. This loss of ground brought the job to an abrupt stop. The cored hole through the basement wall was sealed up, the hole in the road was filled, and was OGI brought in to provide a way ahead.

The task of design was complicated by the close proximity of the River Thames and the fact that it was not possible to install dewatering and monitoring wells from the surface because the road could not be closed. In addition, there was known to be an abandoned sheet pile wall beyond the secant pile wall of building A’s basement. It later turned out that there were also abandoned sheet piles outside building B’s basement. This made horizontal drilling extremely challenging.

OGI’s approach involved installation of horizontal monitoring wells to assess the hydrostatic pressure behind the basement walls. The data obtained was used to establish the hydraulic conductivity of the ground outside the secant pile walls of both buildings.

From this data OGI designed a system of horizontal dewatering wells installed from each basement. The wells and pumping system were installed by a dewatering contractor, working closely with OGI’s design engineer. A variety of methods were used to install the wells including jetting, hand held compressed air-auger and geo-probe rig, the technique used depending on the ground encountered at different levels.