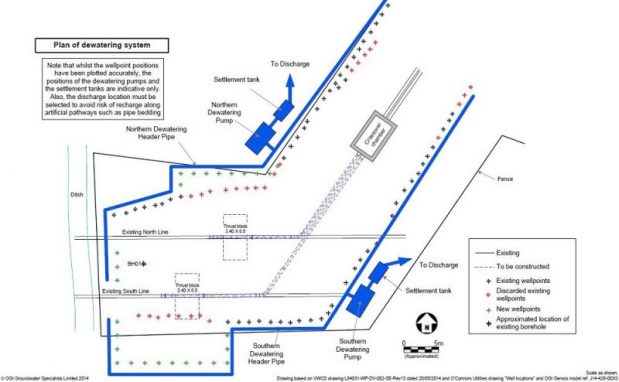 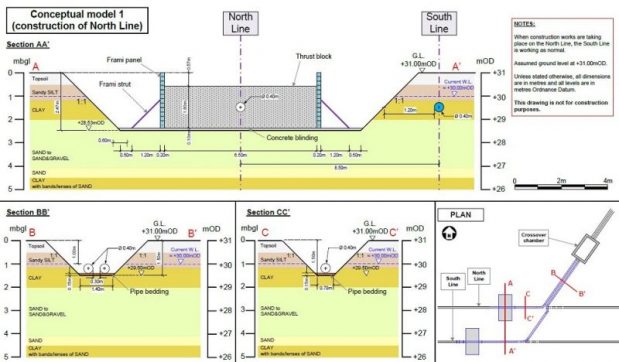 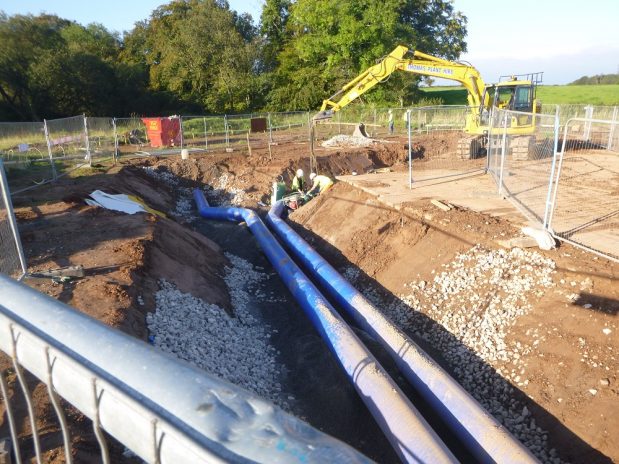 The Main Contractor was engaged to make two new pipeline connections, each requiring the construction of a concrete thrust block at a location in West Cumbria. The pipework connections and the construction of the thrust block structures were to be carried out within two excavations, one on the North Line, the second on the South Line. The excavations were 2-3m deep and were to be constructed with 45° batter embankments.

A high water table meant that there was a necessity to carry out dewatering to enable the excavations to proceed. The site was also prone to flloding during periods of heavy rainfall. Well points from a previous dewatering system nearby were left in place and therefore, could potentially be used again.

OGI was engaged to provide an assessment as to whether the installed well points could be used to dewater the two new excavations, and to specify any additional requirements to enable the excavations to be dewatered. OGI was also required to assess the level of settlement expected as a consequence of dewatering and to design safe stable embankments to enable the pipe connections and associated construction works to be completed.

OGI recommended the installation of a minimum of 42 new well points, to a depth of 5.9m bgl, to enhance the existing system to enable safe excavation of the new thrust blocks and connecting pipework. After combining the shallow and deep aquifer, based on considered assumptions, OGI estimated a total potential settlement of around 6mm. However, as conservative assumptions were made it was anticipated that the actual settlement would be significantly less.

Finally, OGI designed fully certified 45° battered slopes for the retaining embankment which satisfied the safety criteria of Eurocode 7.  An Inspection, Testing and Monitoring Plan (ITM Plan) was developed and strictly followed during construction to ensure the safety and success of the project.