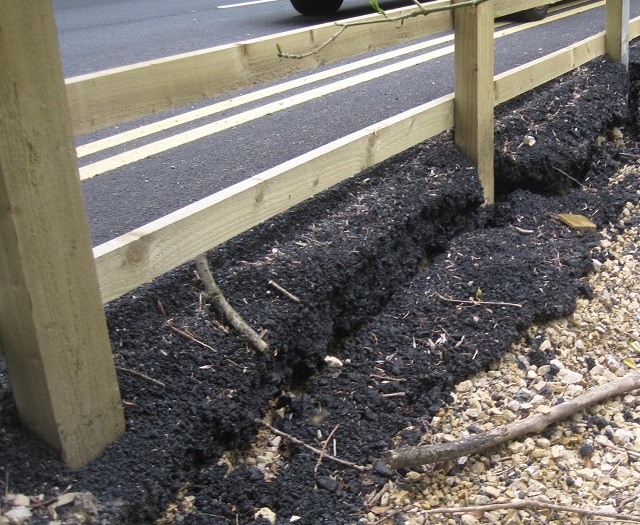 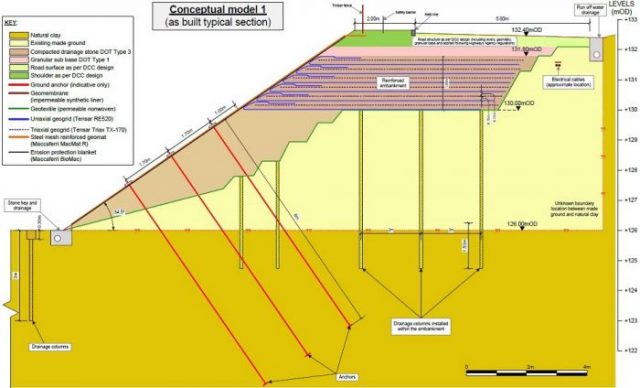 GROUND STABILISATION OF AN EMBANKMENT FOR PREVENTION OF ROAD SLIP FAILURE

A road in County Durham, was experiencing slip failure in a northern direction with a surface crack within the asphalt measured on 20th May 2014 at approximately 55mm wide. OGI was engaged to assess the reasons for the failure of the ground beneath the road, and to advise on engineering techniques to stabilise the ground embankment, which would enable the repair of the road to be carried out.

The main causes of ground failure were identified as:

2. Reduction in shear strength due to high pore water pressure reducing the effective stress in the granular fill and as a direct consequence, for a cohesionless granular soil, a reduced shear strength.

3. Degradation of slope face due to saturated soil being exposed on the face of the batter, causing a shallow slip failure where the granular fill dried out. The dry fill had almost no cohesion, and as a result of gravity, formed its natural angle of repose, being less than 45o. This resulted in a shallow slip failure at the face.

4. Existing drainage trench allowing surface water to be channeled to the drainage trench that acted as a land drain, increasing the flow rate, and consequently the water pressure beneath the road.

5. Wider Slip Failure Occurrences meaning that whilst the local slip failure of the road embankment could be repaired, a wider ground movement could still occur in the future.

The remediation of the slip failure required the improvement of the five separate items contributing to the slip failure. The actions required to mitigate these problems addressed the following summarised aspects:

1. Permanent reduction of excess pore water pressure in the fill beneath the road, using a combination of a drainage and a pore pressure relief system.

2. Improvement of fill material to have sufficient strength for the geometry of the steep road embankment.

3. Improvement of the embankment face to prevent progressive failure of the granular face.

4. Improvement of the existing drainage trench to effectively catch run off water from the road surface and the adjacent field, and prevent surface water from entering the drainage system beneath the road.

5. Additional local drainage added to the system between the toe of the embankment and the burn to alleviate progressive failure at this location.